Plant-based diets have taken root in American culture in recent years, mostly thanks to the growing realization about the health benefits of this eating pattern. But contrary to what some people think, plant-based doesn’t necessarily mean you must forego all animal products. Rather, you might just eat meat or dairy products less frequently, or in smaller portions. To replace those lost calories, you should eat more beans and legumes, vegetables, whole grains, and fruits. These mostly low-fat, nutrient-rich foods have been linked to improvements in many health-related issues, including high blood pressure, diabetes, and heart disease.

Better for your budget and the planet

A plant-forward diet also can help reduce your food budget. And there’s yet another reason to feel good about this eating pattern: it helps preserve our planet’s health. A diet that contains only small amounts of animal foods requires a fraction of resources such as water, energy, and land to cultivate, and it generates fewer greenhouse gases. What’s more, by eating unprocessed or minimally processed foods, you avoid the additional energy and packaging that go into the production of processed foods.

“Following a plant-based diet may be an important way to reduce your carbon footprint,“ says Teresa Fung, adjunct professor at the Harvard T.H. Chan School of Public Health. Research suggests that diets high in red meat account for five times the emissions of plant-based diets.

How much plant food should you aim for if you want a truly sustainable diet? In early 2019, the EAT-Lancet Commission on Food, Planet, and Health — a multidisciplinary group consisting of 37 leading scientists from 16 countries — described the type of diet needed to support a world population of 10 billion by the year 2050 in a healthful, sustainable way. Its report urged people to double the amount of fruits, vegetables, and nuts they eat, and reduce consumption of red meat and added sugars by at least 50{cca0cc7c4b81236e0d96d7a0b06af69f647318c37acb42646aafbd7d3abba764}. The recommendations are quite a departure from what most Americans eat — allowing for only a single 3.5-ounce serving of red meat per week. The commission included a graphic representation of its “planetary health plate” that shows just how much of a person’s overall diet should come from plant-based sources.

If you need some inspiration for moving toward a plant-based diet, try these easy recipes from Monique Tello, MD, MPH. Both contain a variety of veggies and are very adaptable — simply swap in your favorite vegetables or those you happen to have on hand. Frozen or low-sodium canned veggies are a convenient and still nutritious alternative to fresh produce.

This recipe works very well with frozen veggies. For dinner, this can serve two to three people. Add a side salad, if possible.
Course Dinner 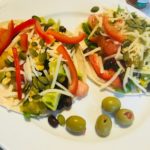 This recipe will serve six people if some of those people are young children. For hungry teens and adults, expect it to feed three or four.
Course Dinner